Kon Kast produces the massive DuraHold retaining wall system for projects with wall height up to 10m (32 ft.) when combined with geogrid. DuraHold can also be used for walls up to 1.8m (6 ft.) in height where property lines preclude geogrid being used behind the wall. The individual concrete blocks have a random block pattern on their face, producing a pleasing visual effect. Each block has offset keyways that move the block above 1 ½" towards the retained soil, thus producing a 1:8 wall batter while maintaining a level base. This means the installer is not required to slope the base for the blocks to produce a wall batter strong enough to resist soil pressures behind it.

For lakeshore applications, Kon Kast also manufactures a Seawall Retaining Wall which is a concrete barrier that measures 1067mm (42") in height and 3048mm (10 ft.) in length with a 914mm (36") base width. The Seawall was designed by a structural engineer to resist the soil pressure behind it and also to resist the forces of ice build up in front of it. 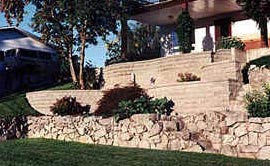 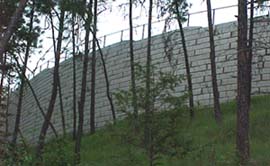